Frozen has given Disney their biggest commercial animated movie success of all time. Expectations are high and all eyes are on Disney. Lots of theories are doing the rounds as we all wait for Frozen 2.  Here are the top 3 rumours we’ve read and loved:

Prince Hans returns – and is the love interest for Queen Elsa. Maybe this time the message from Disney is to be forgiving and make the change into a better person. They were certainly clever in Frozen when Hans (who has us all believing he was a good guy) turns out to be a nasty villain. The act of true love wasn’t a man rushing to save a woman but the love between two sisters and one sacrificing herself for the other. Prince Hans made a cameo in Frozen Fever so is it really too far fetched to expect him back to mix things up between the sisters? “Born or cursed with them…?” Elsa was born with magical powers, so it is unrealistic to suppose Anna might have powers too? Since Elsa’s powers are for Winter/snow/ice maybe Anna will have the powers of Spring/life/birth? 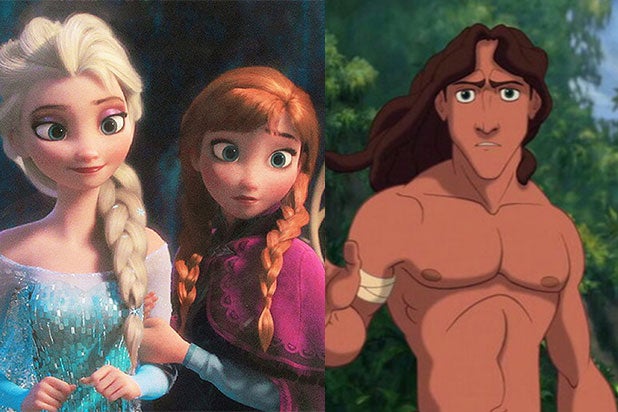 Chris Buck has confirmed that Tarzan is actually the brother of Anna and Elsa. Read more about that theory here. Just to clarify, Chris Buck also shot Tarzan, so it’s kind of a big deal for fans when he says “Elsa’s parents didn’t die on the boat. They got washed up on a shore in a jungle island. The queen gave birth to a baby boy. They build a treehouse. They get eaten by a leopard.”

It’s not exactly a stretch to think that Tarzan might make his way to Arendelle for Frozen 2.

There’s some interesting images doing the rounds on the internet too!

A happy event coming in Frozen 2….?

A new friend for Olaf?

We’re so excited for Frozen 2 and with Kristin Bell confirming she’s just about to start work on the movie, this must mean that the majority of the animation is complete and voice work is being done.  Still, with a release date of 2018 there’s still a while to go yet. We’ll just keep reading the rumours and looking at the pretty pictures until then! 🙂

What are you looking for?

Reading so many more #disneyhistory books and think I have come across my favourite abandoned #disney #animation #balletdesfleurs The artwork here was by story artist #biancamajolie and can be found in Volume 1 of @didierghez #theydrewastheypleased
Another edition to the reference library. The first #theydrewhowtheypleased by @didierghez
An early birthday present as it couldn’t be hidden #fantasia #sorcerermickey #sorcerorsapprentice #mickeymouse #disneysnowglobe
Have started to collect some animation books specifically the #artof books from #pixar and making my way through The Art of #soul and I love this piece of art work by #stevepilcher
If ever there was a quote to live your life by 😉 #piratesofthecaribbean #xatencio #disneyland #waltdisneyworld #disneylandparis #tokyodisneyland
The details in the #towerofterror gift shop are superb. Love this advertisement for the hotel
I love the back lighting on the AT-AT at #hollywoodstudios #starwars #maytheforcebewithyou #waltdisneyworld
A Friday morning spent watching one of my all time favourites #piratesofthecaribbean #captainjacksparrow #willturner #elizabethswann #captainbarbossa #johnnydepp #orlandobloom #keiraknightley #geoffreyrush #disney #jerrybruckheimer #goreverbinski #yohoyohoapirateslifeforme
Diving into books makes me appreciate the attraction posters even more #piratesofthecaribbean #disneyimagineering #waltdisneyworld
Was flagging earlier, so filled up this bad boy. #disneylandparis #eurodisney #shopdisneyuk
Back when #disneylandparis25 was in full swing. Who is excited to see what #disneylandparis30 brings us next year? #disney #disneylandparis #disneyparks
Finally managed to get hold of a copy of this. It’s not in the best condition and may have to be replaced later on, but for now it will sit alongside the Haunted Mansion book also written by #jasonsurrell #piratesofthecaribbean #disneyland
Amazing the details you forget #disneyland #toontown #mickeymouse
It’s been a while. Kinda felt like this guy for a long stretch #dlp #disneylandparis #aliceinwonderland #doormouse #lewiscarroll
Another day, another Disney top

LISTEN TO THE PODCAST!

WANT YOUR AD RIGHT HERE? YOU CAN REACH THOUSANDS OF OUR READERS EASILY! CLICK HERE TO LEARN MORE.

HOME   ABOUT US   THE PODCAST THE VLOG

How would you like 10% off disney inspired candles? Shop Main Street Scents, ride inspired candles, resort fragrances and so much more! Click here to shop and use code MKOW10 for 10% off! Candles, melts, room sprays, reed diffusers and more!